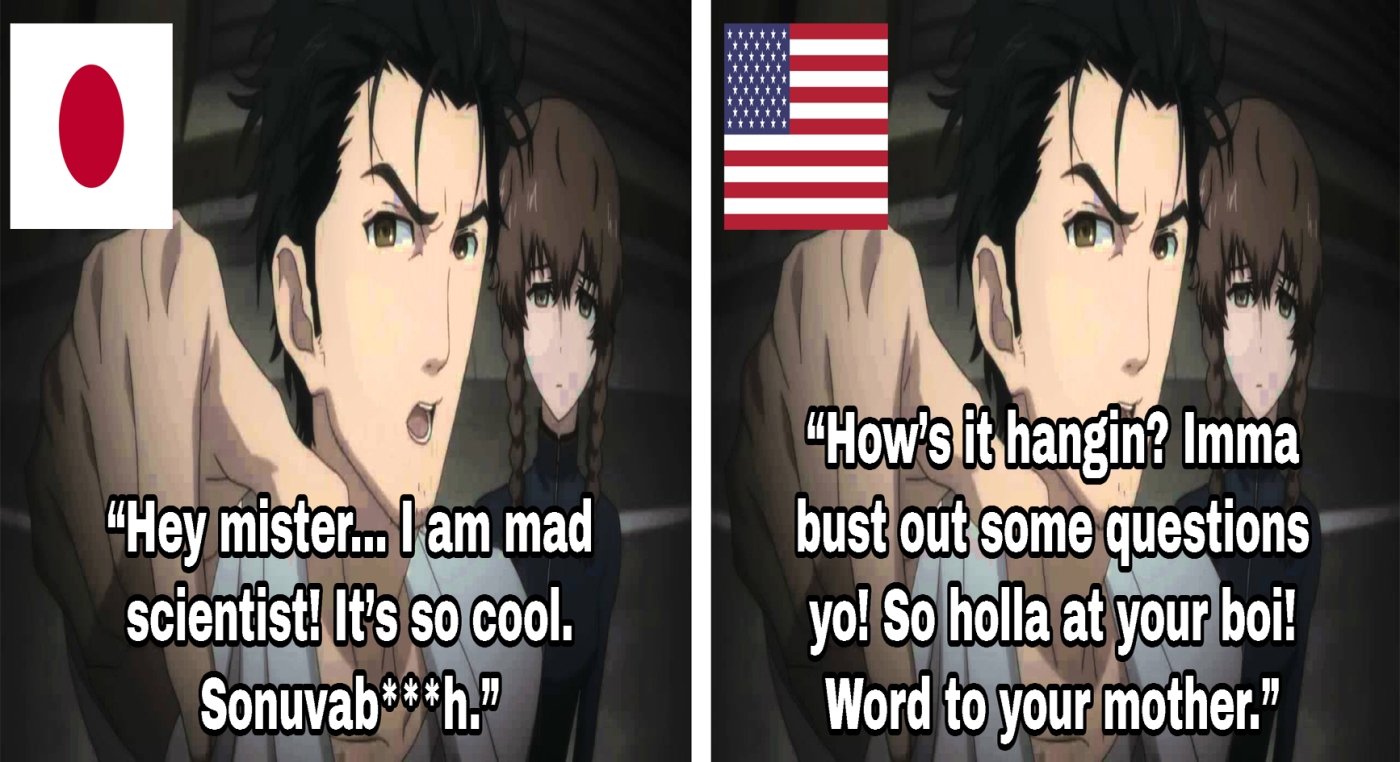 When it comes to recording voice over in anime, cartoons, or video games, they’re all complex processes that have a lot of technical skill at work. There’s many parts to it, and with how the main process is done, there’s two different methods. The methods they do with adapting, recording, and mixing is done in either ADR or Non-ADR format. ADR stands for a few things, like dubbing or looping for example, but the preferred term for it is: Automated Dialogue Replacement. ADR is a common format for how voice over is recorded in studios that’s mostly seen in Japanese cartoons, or anime. It’s also seen in foreign cartoons, shows, or movies. There are a handful of parts in ADR voice-over that makes it different from how the process is with Non-ADR voice-over. The two countries I will mostly use to explain the differences will be America and Japan.

The script is basically the backbone for both methods in production. It’s the most vital part in how lines are interpreted and adapted. For ADR voice-over, the script is written to adapt to whichever country is viewing the show or playing the game that comes from a foreign country to them. It’s a careful process for writing a script that is adapted for american audiences for a show that came out in Japan originally. Mostly everyone here in America doesn’t know how to speak or understand Japanese. So, the responsibility falls upon people who understand both English and Japanese to help write the script. On top of that, the script needs to be written on a professional level to the point where american audiences are able to understand the dialogue and know what’s being said. In return, the Japanese creators need to be satisfied with how accurate the script is adapted when translating. This is very important because there have been a handful of moments where the Japanese is not satisfied with the handling of the American dub of their product.

An example for this is with the anime movie, Evangelion 3.0: You Can (Not) Redo. When adapting the script for the movie, the American team handling the dub wrote the script and recorded the lines while finishing the rest of the usual pipeline whenever they handle the technical process of any anime series or movie they acquire. However, when they showed the finished version to the Japanese team to make sure that everything checks out. The Japanese were not satisfied with how the script was written for the movie. So because of this, the American team was asked from the Japanese to redo everything with the production. They basically had to: rewrite the script, re-record the lines, etc. Although, as a result, the Japanese worked very closely with the Americans to make sure that everything is okay and ready to go with the movie so it can be released to the public over in America.

There are also some moments where the whole “lost in translation” situation comes up too. The Japanese will sometimes have a line in the script that is a reference to something in their culture that the western audience won’t really get. So over in America, either they keep that reference in, or, for some companies, they write their own reference as a countermeasure to make up for it. They might even have a little fun and write their own original lines to keep within the flow of the script so everything doesn’t derail entirely. They only do this if the Japanese do something unique with their own script. This scene from Steins;Gate is an example of this:

The context of this scene is that Rintaro Okabe, the character saying the line, is looking where a pin came from and asks local merchants. One of the merchants is black and has cool dreadlocks. So Rintaro, mistakenly, says his line in order to communicate with him even though the merchant spoke Rintaro’s language. The Japanese wrote that line in the script, and the Japanese voice actor for Rintaro speaks English when saying his line. This line is well known because of the direction in the script as well as how the line was said. So when Funimation, company based out in America, came across this scene, they wrote the line in the same unique fashion as the Japanese did but with their own words.

Compared to ADR Voice-Over, the process for adapting the script with Non-ADR in cartoons, anime, and video games isn’t as complicated when it comes to communication. The process is still technical and requires a lot of skill, like ADR Voice-Over. The obstacles that Non-ADR Voice-Over mostly need to overcome are writing the script itself and making sure that the grammar is correct and written in their best intentions. In this case, the team doesn’t really need to worry about making sure the script adapts well to its original source from the country it came from. It’s a little bit more faster in the communication side of things with making edits to the script if needed.

An important thing to note about this is that this is considered when/if the product is in the same country, or before it shifts from Non-ADR to ADR once other countries acquire the licenses for the product for their countries. So adapting the script is one major thing, but it doesn’t stop there because the recording process is also a big difference between the two.

The recording process is mainly what people identify with the term “ADR” itself. It’s a very long and very technical process itself. The two main components for the process are Casting and Recording. For casting, the producers, that work on the dub for the anime or game they acquired, cast voice actors that they feel fit the personalities for each character. Now, this can go into two directions. The first being that the casting directors cast each voice actor for their respective role based on their acting and how they sound in correlation with the character’s personality. The second being that casting directors cast each voice actor based on their acting, but their main focus is to match the voice actor with how they sound to the character’s original voice actor. So, basically, they make sure that the american voice of the character matches the Japanese voice of the character.

Here’s an example from the anime, Noragami, where scenes from the anime are shown with, first, the Japanese voices and then the English voices right after:

As for recording, the voice actor records his/her lines from the script given to him while getting direction from the ADR director. An important thing to note about this is when it comes to ADR Voice-Over, the footage for the anime or game is already done. In the recording booth, the voice actor is in the sound proof room with the mic, but they also have the script with them either on a screen or they have a physical copy. They also have a TV displaying the footage of the scene that they’re recording. On the other side, the ADR director and the sound engineer handle the technical side of things. They acquire the recorded lines and then either modifying them on the spot or save them for the next phase in the pipeline later on.

Here’s an example from a recording session of the anime, Fairy Tail, where voice actress Cherami Leigh is recording her lines for her character, Lucy Heartfilia:

So when handling the whole process, one main goal is that the voice actors need to breathe life into their characters when giving their performance. They, basically, add the “acting” part in voice acting. Occasionally, they’ll record different takes and also get feedback from the ADR director, just like acting in general. Another main goal is that they need to match the moving lip flaps of the character they voice as they watch them on the TV screen. It’s a hard task to accomplish, but it needs to be done. It also falls upon the sound engineer to edit the recorded line to make sure it syncs up to the lip flaps if the voice actor is either too early or too late by a little bit when recording the line.

When doing the Non-ADR side of things with the whole recording process, the perspective is different from what ADR Voice-Over has to deal with. For one thing, the footage for either the cartoon, anime, or video game is not present for the voice actor to look at most of the time. The voice actors take direction from the director working with them, just like acting in any production in general. The big thing is that they don’t have to worry about matching lip flaps most of the time. They would read the script and record their characters’ lines while doing multiple takes at the same time. There’s even times where a few of the voice actors are in the same booth together recording their lines for their respective characters. Whenever this happens, it helps each voice actor act off one another in response.

Here’s an example from an old recording session of the movie, Toy Story, where a handful of the voice actors are recording their lines for their characters in the movie:

While the voice actors record their lines after being cast as their respective characters, the product is either being worked on at the same time, or the development hasn’t even started yet in that department. An example for this is Disney and Square Enix’s game, Kingdom Hearts 3. This game has been stuck in development hell for years and is still being worked on to this day. So during the process for developing this game, the voice actors recorded their lines while the game is being worked on. The proof for this shows in the trailers released within the past few years. This is mainly what separates ADR Voice-Over and Non-ADR Voice-Over when it comes to the recording process.

ADR, Automated Dialogue Replacement, is a very complex and technical process in Voice-Over. Not everyone knows how it’s used or even realize how it’s everywhere in any production that utilizes sound in digital content. It’s come very far with the evolution of technology over the past decades along with the staff caring more about how things sound when adjusting to the overall standards being raised as time has passed. There will always be good and bad examples to show how ADR is utilized. Therefore, it’s important that these examples are known more to people who love to watch cartoons, TV shows, anime, movies, and play video games.